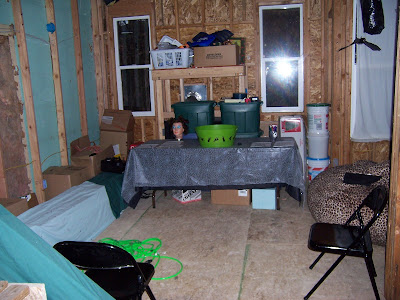 We took the boat down to our family reunion in Fish Lake, Utah. This was also the first time that we put up the mast. We love Goo Songs! Someday we will write a book with pictures and everything!

Goo is a cute fat cat.
His loves in life include food ... well, pretty much that's it. Here are some popular home-sung Goo songs:
To the tune of "Matchmaker" from Fiddler on the Roof:
Fat Goozer, Fat Goozer, he wants some food
You have reached the end of all recorded Goo Songs
Posted by Nae at 8:43 AM No comments:

So, we had a discussion at work about "Brand Attachment", which pretty much is a brand with which you've had a great experience and have formed an emotional bond. It can be objects, or even people can be brands. Currently some of the things to which I have Brand Attachment include:
Toyota = I don't think that ever in my life will I want to be without
a Toyota to drive.
Sketchers = My favorite shoes ever. Could anything be more
comfortable?
SandW Canned Food = I pick them off the shelf first, and always hope
they're on sell. I really think they taste better!
Mo's Restaurants = In my opinion there is no better restaurant
anywhere. I guess I need to move to Oregon.
Posted by Nae at 8:43 AM No comments:

Wow - almost a month and a half since I've posted anything. I figure I'd throw something on here, and then disappear again ... back for one split second, and then off to enjoy spring/summer.

So obviously the best thing for me to tell you about is the sailboat. Ha, ha.

We never did really name it. We tried, but it didn't stick. It's like naming a pet ... you have to keep trying names and soon enough one will stick! For now we just call it "the boat", like on One Crazy Summer ... which is how we could describe the upcoming summer of 2009! Woo-hoo!

We actually rented a slip at Utah Lake for the sailboat. Ours is the sorriest looking thing out there, but it's ours and we love it. And we're not the least bit ashamed when we have to cover our boat with a tarp because it isn't self-bailing and we don't want it to fill up with water. Not the least bit ashamed.

It's been an interesting experience moving into the "neighborhood". Our new "neighbors" come by to greet us so they can meet the new people on the dock. So far we've met Kevin and Valerie in the house boat, and Stanley who is two boats down. Also the "pasty people" in the Hunter three boats the other way, who look as if they've never seen sunlight. And the "midnight sailor" in the matching Hunter next to him, who wonders why we bring our boat in when it gets dark. "It's just barely getting good out there." Someday maybe we'll know their names.

There are other things we've seen as well that let us know how unfamiliar we are with all of this, and at the same time how exciting it is. For one, I've never seen anyone go fishing with a crossbow ... until today! Wowser!

And I barely understand how Matt and I are able to get our boat back in the slip ... sometimes I wish we had another person to make it easier. And then I see Stanley do it single-handedly! I wanted to start cheering - it was great!

And I'm still trying to understand the nightly campfire crowd that gathers. It's quite a party and they seem like they're the oldest of friends. I have a feeling it's a long-standing tradition.

It's just the beginning of our time down there, and I have a feeling it's going to be a very crazy summer! Hope you all have the same!!

Five Jobs I've Had (I did six because these are ALL the places I've ever worked):

Five Movies I Can Watch Over and Over:


Five Places I've Lived (I did three because I've only lived in three!):

Five Places I've Been on Vacation:


Four Things I Did Last Week:
Posted by Nae at 8:42 AM No comments: